A year or so ago we were contacted by Mr Ian Richardson who asked for our assistance to locate the grave of his aunt, Florence (Florrie) Cox.

Ian is an Australian former journalist who lives in London.  He was born in Wonthaggi and worked for a time at 3BO in Bendigo and Radio 3AW in Melbourne.  From there he and wife Rosemary travelled to London where he was offered a job in the new department of BBC World Services.  They now reside permanently in the UK.


It was 1997 and Ian was sorting photos with his mother when he came across a picture of her grandparents and their children.  There was one person in the photo Ian didn’t recognize. Ten years of sleuthing ensued , the result of which was Ian piecing together a story that anyone, journalist or otherwise would be intrigued by. 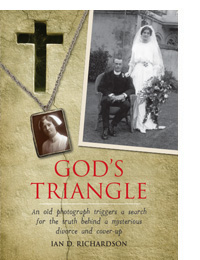 When Florence "Florrie" Cox and the newly-ordained Baptist missionary, the Rev. Frank Paice, became engaged to be married in 1912, there was much joy in the two families and at the church they both attended in Melbourne, Australia. But it was in an age when society regarded discussion about sexual matters - even at their most basic - as a taboo. Hence, Frank and Florrie hit the marital rocks on their honeymoon in Bengal, India, when they discovered she had a very rare intersex condition, about which they knew nothing. So began the compelling saga of how the couple struggled to understand and cope with Florrie's condition, while fellow Baptist missionary Olga Johnston waited impatiently in the wings to snatch Frank away.

Why did the families and the church go to such lengths to hide what happened? And why did two Supreme Court judges in Melbourne order the divorce file to be sealed for all time? Ian Richardson, an Australian journalist who worked for many years for the BBC, was determined to learn the truth about his Great Aunt Florrie. God's Triangle is the result: a true story of revelation and betrayal.


I’m happy to report that we were able to locate Florence’s grave.  It was a particularly difficult grave to find, wedged between two rows and completely unmarked.  You can see in the photo below it runs between two rows - very unusual. 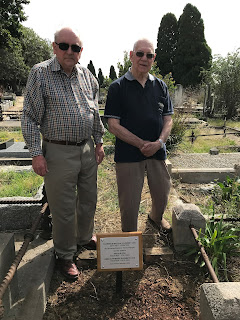 Ian was very appreciative of FOBKC's help in locating Florence's grave.  He returned to place a special plaque on the grave so that Florence can finally be recognized and given the acknowledgement and respect she deserves. 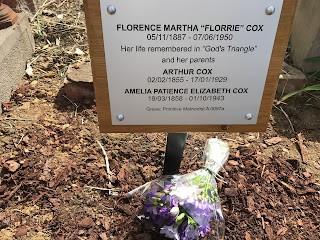 For more information or to purchase this fascination book go to http://www.godstriangle.com
Posted by Friends of Kew Cemetery at 16:10