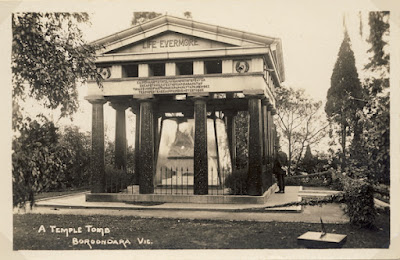 It is included on the Victorian Heritage Register.  The heritage citation explains why it is significant.

The Springthorpe Memorial is historically important in demonstrating nineteenth century social and cultural attitudes to death, and for reflecting the ideals of the Victorian Garden Cemetery movement which aimed at providing comfort for mourners. The memorial is important in demonstrating uniqueness, no other example being known of such aesthetic composition, architectural design and execution, or scale. It is important in exhibiting good design and aesthetic characteristics and for the richness and unusual integration of features. The Springthorpe Memorial is also important in illustrating the principal characteristics of the work of a number of artists including Desbrowe Annear, Mackennal, the glass manufacturers Auguste Fischer and the bronze work of Marriots.

However, while the citation reflects on the Memorial's historical and spiritual significance, it makes little comment about why it was constructed.

Annie Constance Marie Springthorpe (nee Inglis) was born on 26th January 1867 and married John Springthorpe on 26th January 1887. He was a well-known and highly respected Melbourne doctor who worked as a pathologist at the Alfred Hospital and was also out-patient physician at the Melbourne Hospital. Besides running a thriving Collins St practice, he also became a university lecturer in therapeutics, dietics and hygiene; he wrote numerous articles for medical and other journals and he became president of the Melbourne Medical Association in 1900, three years’ after his wife’s death. He established a training system in dentistry and became the first president of the newly established Royal Victorian Training Nurses Association in 1901 which he had helped to found. He published a two-volume textbook, Therapeutics, Dietics and Hygiene in 1914, and in that same year he enlisted in the Australian Army Medical Corps eventually, becoming senior physician to No. 2 Australian General; Hospital in Egypt and then in France. Throughout his war service and beyond, he became interested in soldiers who suffered ‘shell shock’, a new branch of the merging new field of psychiatry.

Before he went to World War 1 his beautiful and much treasured wife died: Annie, whose life-sized image is depicted in the memorial lying in state. Annie died when she was 30 years old giving birth to their fourth child, Guy, who subsequently also became a psychiatrist. Annie’s death occurred after only 10 years of what John describes in his diaries as “an idyllic marriage”.

John Springthorpe was so devastated with his wife’s death that he wrote copious notes in a diary and he also kept a scrapbook, both of which are held in the State Library of Victoria. In these documents we can read about how he tried to overcome his loss and about the development of this ‘Temple Tomb’, which he designed and spared no cost in having erected to the memory of his wife.

Harold Desbrowe Annear, the distinguished architect, was employed to construct a model of the whole tomb. He designed the tomb in classical Greek Doric style with lead light glass roof and dark green granite columns.

Within the tomb noted sculptor Bertram Mackennal’s impressive life-sized statues depict an angel of love placing a wreath over Annie’s head, while an angel of sorrow plays the lyre in a pitiful mourning posture. 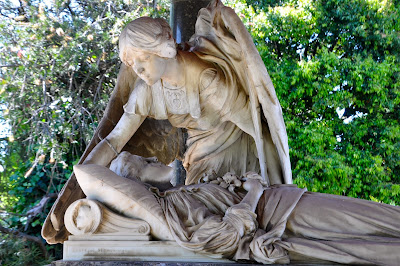 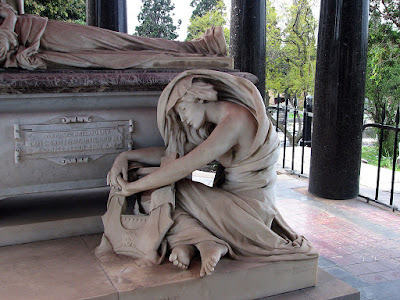 Initially the statuary was enclosed in a glass pyramid. This was removed in the 1940s when it was discovered that mould was starting to appear on the marble.

The copper snake heads near the top of the temple occasionally spout water when it rains and the Tiffany glass roof casts a rosy red glow over the faces of the statuary in summer.

In this remarkable memorial, inscriptions feature everywhere. In addition to lines from the Bible in English and ancient Greek and Latin (which can be seen on the top of the structure itself), on all four sides of the statuary group, the tiled floor also contains various inscriptions. These include lines from Walt Whitman, William Wordsworth, Robert Browning (and others), and some written by John Springthorpe himself. Yet Annie’s name is not mentioned anywhere on the memorial and the names of the other descendants who also lie within the tomb/mausoleum only have their initials in the corners. However, the mosaic tiles note the eeriness of the following coincidences with regards to these dates: Annie was born on 26th January 1867, she was married on 26th January 1887 and she was buried on 26th January 1897.

Springthorpe also commissioned William Robert Guilfoyle, the curator of Melbourne’s Royal Botanic Gardens, to landscape the grounds of the temple, planting out Western Australian flowering red gums and planning a “Garden of the Dead”. On March 14, 1899, Springthorpe wrote to the Trustees of the Boroondara Cemetery, Kew, requesting a site for the erection of a temple. In April 1899, he was shown the proposed site for the mausoleum at the Boroondara Cemetery with a glorious view of Heidleberg and Mount Macedon towards the horizon. His diary entries convey a mounting excitement and a sense of achievement, as Springthorpe imagined the temple, tomb and garden of the dead completed in a harmonic unity. However, much of the surrounding land was taken over by the Cemetery Trust in the 1930s after Springthorpe’s death when it was discovered that this land had not been paid for. Today, an imposing gate with a large imposing aluminium and bronze shield, stone seats and sundials are all that remain of this proposed garden.

It was a ‘headline act’ from its unveiling in February 1901 and still is today, regarded by many as being one of the greatest funerary monuments in the Southern Hemisphere.

Work for the conservation of the Springthorpe Memorial is currently being undertaken by a working group comprising representatives of Boroondara Cemetery Trustees and the Friends of Boroondara (Kew) Cemetery.  A collaborative approach is essential as restoration of the memorial is not the responsibility of the Trust.  In fact, the memorial remains the property of the family and before any work can proceed approval must be sought and granted from family members.  Happily this has been obtained and the family are thrilled that conservation work will prevent any further deterioration of this historically important memorial.

Funds for this conservation work will be sought via Government Grants and philanthropic donations.