Athol McGregor Kirkwood is one of the many sons buried on foreign soil but remembered on their parents’ grave in Boroondara Cemetery. 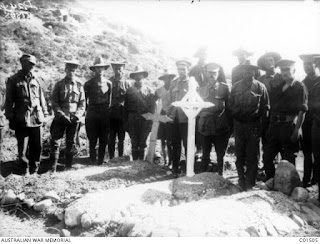 Group portrait of 14 unidentified soldiers and officers standing in a cemetery on the Gallipoli Peninsula. The central cross commemorates the men of C Company, 6th Battalion, who were killed in action. The grave on the right is that of 323 Lance Corporal Athol McGregor Kirkwood of Melbourne, Vic, who was killed in action on 27 July 1915 and was posthumously awarded the Distinguished Conduct Medal. The officer standing directly behind the headstone, second from the right, is wearing epaulettes decorated with stripes.

Shrapnel Valley Cemetery is a cemetery from World War I and is the second largest Commonwealth War Graves Commission Cemetery in the former Anzac sector of the Gallipoli Peninsula after Lone Pine Cemetery. Shrapnel Valley (sometimes called Shrapnel Gully) got its name in the early days after the landing. As the Turks realised that this had become the highway to the front their guns rained shrapnel shells down upon this area. These shells made a particular whistle before they burst showering those below with lethal pellets. It was said that as the shells could be heard before soldiers passing through the valley had the chance to take cover. Confronted with such danger, it was written that men became ‘fatalists’ and thought that a particular shell had a man’s name and number on it! – ‘Until that shell arrived, it was best to let others see them going proudly rather than flinching’.


Gallipoli was an eight-month campaign fought by Commonwealth and French forces against Ottoman Empire forces in an attempt to force the Ottoman Empire out of the war, which it was hoped would relieve the deadlock of the Western Front and to open a supply route between Russia and the Mediterranean through the Dardanelles and the Black Sea.
8 May 1915
The Australian 2nd Brigade (Victoria) - 5th, 6th, 7th and 8th Battalions - attacked Turkish positions at Krithia in the British area at Helles. The attack was unsuccessful. Charles Bean wrote:

The stone houses of Krithia were still 2000 yards away, but in advancing 1000 yards the brigade, already reduced at Anzac to 2900 men, lost in one short hour another 1000. 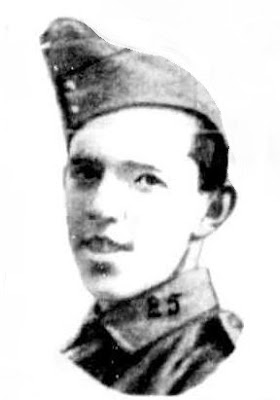 For conspicuous gallantry and ability on 8th May, 1915, during the operations North of Cape Helles (Dardanelles).  During an advance, when the Officers and Non-Commissioned Officers had been killed or wounded, Private Kirkwood assumed the command, taking charge of the men in his immediate neighbourhood, directing their fire and by his coolness and courage rendering invaluable assistance in steadying all ranks at a critical moment.  He led each advance in his section of the line and finally performed most valuable service in consolidating the position gained.

Posted by Friends of Kew Cemetery at 23:10

Email ThisBlogThis!Share to TwitterShare to FacebookShare to Pinterest
Labels: Anzac